Sts. Raphael, Nicholas and Irene of Lesvos and the defense of Orthodoxy 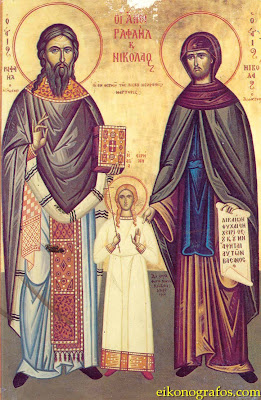 Sts. Raphael, Nicholas and Irene the Newly-Revealed Martyrs of Lesvos (Icon courtesy of www.eikonografos.com used with permission)
The following fact, missing from some hagiographies, details how St. Raphael came to Lesvos after being Chancellor of the Ecumenical Patriarch of Constantinople. Besides Sts. Raphael, Nicholas and Irene's many virtues and miracles, the following demonstates their great defense of the Orthodox faith:

"St. Raphael was one of the group of clerics of Constantinople who were against union [with the Pope] (including St. Mark Bishop of Ephesus, his brother John, George Scholarios, who later became the first Ecumenical Patriarch after the fall of Constantinople), as is shown by the stance he took when on December 12, 1452 the representative of the Pope Cardinal Isidoros I celebrated Divine Liturgy in the church of Hagia Sophia, during which the terms of the Council of Ferrara-Florence (1438-1439) were read in the presence of the Emperor Constantine. Sts. Raphael and Nicholas refused to attend, and the emperor punished them with exile to Aino.

During the period of their exile, the Queen City [Constantinople] fell to the Ottoman Turks. A year after the fall of Constantinople, they sought a new place of refuge. They embarked with other refugees from Alexandroupolis towards Lesvos, which was still free, and after a short trip they arrived at the small port of Thermi on March 14th 1454."
(amateur translation from: http://www.immyt.net/saints/martyrs2.htm)

Nine years later (+Tuesday of Bright Week - April 9th 1463), they were martyred for Christ by the Turkish invaders. In 1959 they began to appear and work countless miracles for the faithful, while their graves and relics have become fountains of healing for the world. May they intercede for all of us! 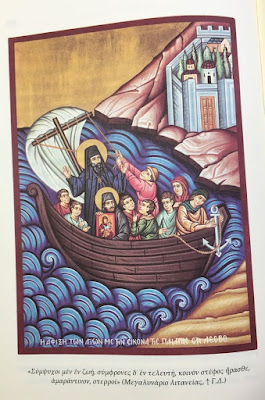 Sts. Raphael and Nicholas fleeing before the fall of Constantinople, heading to island of Lesvos (source)


Apolytikon of Sts. Raphael, Nicholas and Irene
Having contended on Lesvos for the sake of Christ God, you have sanctified the island since the discovery of your sacred relics, O blessed ones; for what reason we honour you, O God-bearing Raphael, together with Nicholas and virgin Irene, as our divine protectors and intercessors with the Lord.
(taken from: http://orthodoxchristian.info/pages/sts_rni.htm)

Through the prayers of our Holy Fathers, Lord Jesus Christ our God, have mercy on us and save us! Amen!
Posted by Agioi_Anargyroi at 1:20 PM