St. Laurence the Martyr and Archdeacon of Rome, and those with him 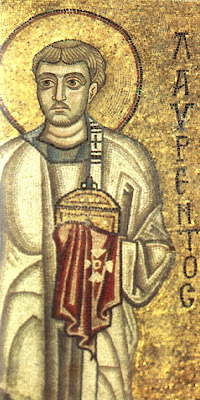 St. Laurence the Martyr and Archdeacon of Rome - Commemorated on August 10 (taken from: http://ocafs.oca.org/FeastSaintsViewer.asp?FSID=102258)
"The Martyrs Archdeacon Laurence, Pope Sixtus, Deacons Felicissimus and Agapitus, the Soldier Romanus were citizens of Rome, and suffered in the year 258 under the emperor Valerian (253-259). Holy Pope Sixtus, born at Athens, received a fine education, preached in Spain and was made bishop in Rome following the martyr's death of Holy Pope Stephen (253-257, commemorated on August 2). These were times when a pope occupying the Roman throne, was known to choose death for the faith. In a short while St Sixtus also was arrested and put in prison together with his deacons Felicissimus and Agapitus.

When the holy archdeacon Laurence visited Pope Sixtus, whom they held in prison, he cried out with tears: "Whither art thou gone, father? Why hast thou forsaken thine archdeacon, with whom always thou hast offered the Bloodless Sacrifice? Take thy son with thee, that I may be thy companion in having blood shed for Christ!" St Sixtus answered him: "I have not forsaken thee, my son. I am old and go to an easy death, but yet greater sufferings await thee. Know, that after three days upon our death thou shalt follow after me. And now go, take the church treasury and distribute it to the poor and needy Christians." St Laurence zealously did the bidding of the holy hierarch.

Having heard, that Pope Sixtus had been taken to trial with the deacons, St Laurence went there so as to witness their deed, and he said to the holy bishop: "Father, I have already fulfilled thy command, and distributed by hand thine treasury; forsake me not!" Hearing something about treasure, soldiers put him under guard, and the other martyrs were beheaded (+6 August 258). The emperor locked up St Laurence in prison and ordered the chief jailer Hyppolitus to keep watch over him. In prison St Laurence with prayer healed the sick gathered together with him and he baptized many. 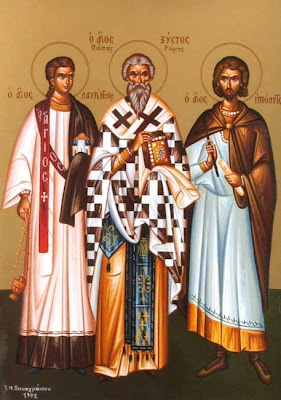 Icon depicting Sts. Laurence the Archdeacon, Sixtus Pope of Rome, and Hippolytus (taken from: http://christopherklitou.com/icon_10_aug_laurence_archdeacon_xistus_pope_of_rome_hippolytus.htm)
Astonished by this, Hyppolitus himself believed and accepted Baptism from St Laurence together with all his household. Soon the archdeacon Laurence was again brought to the emperor and commanded to produce the hidden treasure. St Laurence answered: "Give me a period of three days, and I shalt show thee this treasure". During this time the saint gathered up a crowd of the poor and the sick, who ate only because of the charity of the Church, and bringing them he explained: "Here are the vessels in which is contained the treasure. And everyone, who puts their treasure in these vessels, will receive them in abundance in the Heavenly Kingdom".

After this they gave St Laurence over to fierce tortures, urging him to worship idols. The martyr was scourged (with a fine iron flail with sharp needles), they burned his wounds with fire, and struck at him with metal switches. At the time of the martyr's suffering, the soldier Romanus suddenly cried out: "St Laurence, I behold a bright youth, who standeth about thee healing thy wounds. Beseech thy Lord Christ not to forsake me!" After this they stretched St Laurence on a rack and returned him to prison to Hyppolitus. Romanus brought there a waterpot with water and besought the martyr to baptize him. And immediately after the Baptism of the soldier, he was beheaded (+9 August). When they took St Laurence to his final torture, St Hyppolitus wanted to declare himself a Christian and die together with him, but the confessor said: "Conceal for now thy confession in thy heart.

After some length of time I shall summon thee, and thou shalt hear and come unto me. Weep not for me, but rather rejoice, for I go to receive a glorious crown of martyrdom." They placed him in an iron cage, under which they set an intense fire, and the flames of the fire flicked towards the body of the martyr. St Laurence, glancing at the governor, said: "Here now, you burn only but one side of my body, turn over the other and do my whole body". Dying, he uttered: "I thank Thee, Lord Jesus Christ, that Thou hast accounted me worthy to enter into Thy gates" -- and with these words he gave up the spirit.

St Hyppolitus took the body of the martyr by night, he wrapped it in a shroud with ointments and gave it over to the priest Justin. Over the relics of the martyr in the home of the widow Kyriake they made an all-night vigil and Divine Liturgy. All the Christians present partook of the Holy Mysteries and with honor they buried the body of the holy martyr Archdeacon Laurence in a cave on 10 August 258. St Hyppolitus and other Christians suffered three days after the death of St Laurence (13 August), as he had foretold them of this."
(taken from: http://ocafs.oca.org/FeastSaintsViewer.asp?FSID=102258) 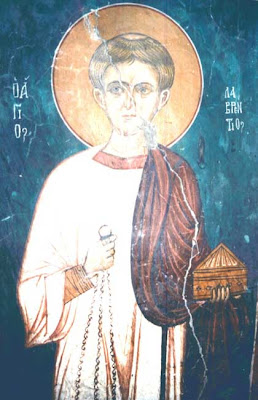 Apolytikion in the Fourth ToneThy Martyr, O Lord, in his courageous contest for Thee received the prize of the crowns of incorruption and life from Thee, our immortal God. For since he possessed Thy strength, he cast down the tyrants and wholly destroyed the demons' strengthless presumption. O Christ God, by his prayers, save our souls, since Thou art merciful.
Kontakion in the Second ToneAflame in thy heart, O Laurence, with the fire divine, thou burntest away the fire of passions utterly, O firm staff of athletes, O thou God-bearing Martyr; and thou in truth while contesting didst cry with faith: Nothing shall separate me from the love of Christ.
(taken from: http://goarch.org/chapel/saints_view?contentid=159)
+
Through the prayers of our Holy Fathers, Lord Jesus Christ our God, have mercy on us and save us! Amen!
Icon of St. Laurence the Martyr and Archdeacon (taken from: http://christopherklitou.com/icon_10_aug_laurence_archdeacon.htm)
Posted by Agioi_Anargyroi at 7:50 AM