The Miraculous Icon of Panagia of Cassiope

This is a beautiful story of an incredible healing by Panagia through her Holy Icon. It is taken from (http://trueorthodoxy.info/los_icon_cassiope_stephen.shtml ): 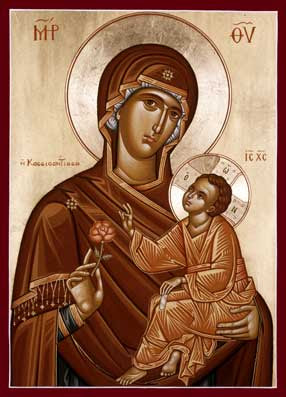 The icon of Panagia of Cassiope is taken from Holy Transfiguration Monastery (http://www.thehtm.org/catalog/product_info.php?cPath=27_49&products_id=58&osCsid=f5e80076890c98bc523da93fb906b608 )
"An Account Of The Ineffable Miracle Wrought By The Holy And August Icon Of Our All-holy Lady The Theotokos Of Cassiope For The Unjustly-blinded Stephen Who Wondrously Received Eyes Again.
Which the Holy Church commemorates on May 8.
A certain woman seeth her son with eyes today,

Yet she beheld him not with those eyes wherewith he saw before.
On the eighth of May God’s Mother gave eyes to the blind man.

Labels: Icons of the Theotokos, Miracles, The Most-Holy Theotokos