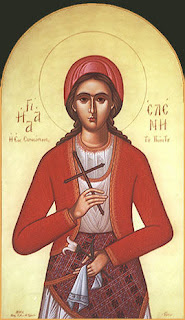 St. Eleni the New Virgin-martyr of Sinope - Commemorated on November 1st (icon taken from http://www.christopherklitou.com/icon_1_nov_helen_of_sinopi.htm)
"She was a maiden of fifteen who lived with her parents in the Christian enclave of Sinope in Pontus during the 1700s. One day, as she went to the marketplace, she passed by the house of the local Pasha (governor), who, seeing her beauty, was seized by lust for her. He ordered his servants to bring her to him, and made two attempts to defile her; each time, however, he was prevented by a mysterious power that kept him from her like an invisible wall. Determined to have his way for her, he kept her prisoner in his house; but she was able to slip away and run home to her parents' house.

Enraged that his prey had escaped, the Pasha called together the leaders of the Christian community and promised that, unless Helen were handed over to him, all the Christians in the town would be massacred. Grief-stricken and fearful, the leaders persuaded Helen's father to return the girl to the palace. The vile Pasha made several more attempts to rape the Saint, but once again he was restrained as if by an invisible wall as she recited the Six Psalms and all the prayers that she knew by heart. Realizing that he was powerless against her, the Pasha had her thrown in the common jail, then ordered that she be tortured to death. The executioners subjected the maiden to several cruel torments before killing her by driving two nails into her skull and beheading her. They then put her body in a sack and threw it in the Black Sea.

Some Greek sailors followed a heavenly light to the place where the sack had sunk, and divers retrieved the Saint's relics, which immediately revealed themselves as a source of healing for many. Her body was taken to Russia; her head was placed in the church in Sinope, where it continued to work miracles, especially for those who suffered from headaches. When the Greeks were driven from Sinope in 1924, refugees took the head with them. It is venerated today in a church near Thessalonika [St. Marina, Ano Toumpas]."
(taken from: http://www.holytrinityorthodox.com/calendar/los/November/01-06.htm) 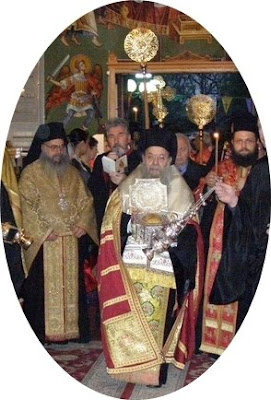 The Holy Skull of St. Eleni of Sinope, the Church of St. Marina, Ano Toumpas, Thessaloniki (taken from: http://misha.pblogs.gr/files/f/275585-eleniagia_kara.jpg) 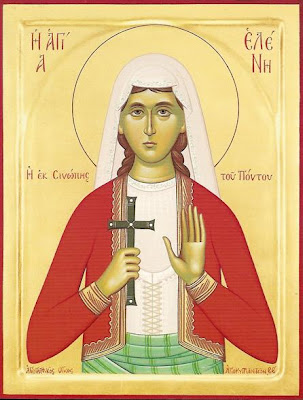 Another icon of St. Eleni the New Virgin-martyr of Sinope (taken from: http://vatopaidi.files.wordpress.com/2009/10/20201.jpg)
Απολυτίκιον Ήχος πλ.Α΄ Τον συνάναρχον λόγον
Tής αγνείας το άνθος το ευωδέστατον και Σινώπης το κλέος και θείον βλάστημα Παρθενομάρτυς τού Χριστού Ελένη πάνσεμνε, η αθλήσασα στερρώς , και καθελούσα τον εχθρόν, της πίστεως τη δυνάμει δια παντός εκδυσώπει, ελεηθήναι τας ψυχάς ημών.
Apolytikion in the Plagal of the First Tone
The most-fragrant flower of purity and the boast and divine offspring of Sinope Virgin-martyr of Christ Eleni most-pure, who struggled steadfastly, and cast down the enemy, with the power of faith and entreats for everyone, to have mercy on our souls.
Apolytikion in the Fourth Tone
O Lord Jesus, unto Thee Thy lamb doth cry with a great voice: O my Bridegroom, Thee I love; and seeking Thee, I now contest, and with Thy baptism am crucified and buried. I suffer for Thy sake, that I may reign with Thee; for Thy sake I die, that I may live in Thee: accept me offered out of longing to Thee as a spotless sacrifice. Lord, save our souls through her intercessions, since Thou art great in mercy.
(taken from: http://goarch.org/chapel/saints_view?contentid=207) 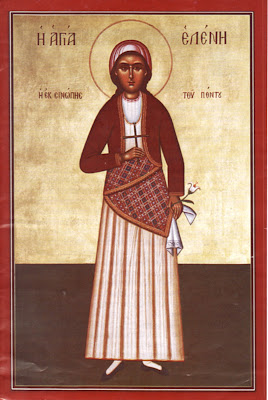