Commemoration of the Miracle of the Archangel Michael at Colossae (Chonae) 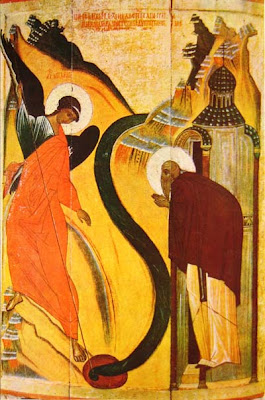 Miracle of the Archangel Michael at Colossae (Chonae) - Commemorated on September 6 (this 15th Century Russian icon taken from: http://upload.wikimedia.org/wikipedia/commons/5/5b/Mikharkhangel3.jpg)
"Near Hierapolis, in Phrygia, there was a place called Chonae (``plunging''), and in that place there was a spring of miraculous water. When Apostle John the Theologian, accompanied by Philip, preached the Gospel in Hierapolis, he looked upon that place and prophesied that a spring of miraculous water would open up there, from which many would receive healing, and that the great Archangel of God Michael would visit that place. Soon afterward, this prophecy was fulfilled: a spring of water burst forth and became widely known for its miraculous power. A pagan in Laodicea had a daughter who was mute, which caused him great sorrow. Archangel Michael appeared to him in a dream, and told him to take his daughter to the spring, where she would be cured. The father immediately obeyed, brought his daughter to the spring, and found many people there seeking deliverance from various infirmities. These people were all Christians. The man asked how he should seek healing, and the Christians told him: ``You must pray to the Archangel Michael, in the name of the Father and of the Son and of the Holy Spirit.'' The man prayed in this way, gave his daughter a drink of this water, and the girl began to speak. The pagan, his daughter and his whole household were baptized. He also built a church over the spring dedicated to the Archangel Michael. Later, a young man named Archippus settled there and lived a life of austerity, in fasting and prayer. The pagans did many malicious things to Archippus, for they did not like the fact that this Christian holy place emanated such spiritual power and attracted so many people to it. The pagans, in their wickedness, rerouted the nearest river in order to flood the church and the spring. By the prayers of Archippus, the holy Archangel Michael opened a fissure in the rock beside the church, and the river's water plunged into it. This is how that place was saved and why it was called Chonae, or ``of the plunging,'' for the river's water that plunged into the open fissure. St. Archippus labored in asceticism there until the age of seventy, and peacefully reposed in the Lord."
(taken from: http://www.westsrbdio.org/prolog/my.html?month=September&day=6) 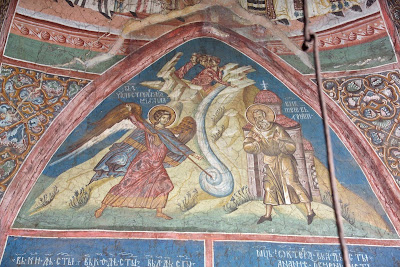 Fresco from Decani Monastery of the Holy Archangel Michael saving his church at Chonae (taken from: http://www.srpskoblago.org/Archives/Decani/exhibits/Menologion/September/CX4K3406_l.html)
"The Miracle of the Holy Chief Commander Archangel Michael at Colossae. In Phrygia, not far from the city of Hieropolis, in a place called Cheretopos, there was a church named for the Archangel Michael, built over a miraculous spring.

This church was built by a certain inhabitant of the city of Laodicia in gratitude to God for healing his mute daughter. The holy Chief Commander Michael appeared to this man in a dream and revealed to him that his daughter would receive the gift of speech after drinking from the water of the spring. The girl actually did receive healing and began to speak. After this miracle, the father and his daughter and all their family were baptized. In fervent gratitude, the father built the church in honor of the holy Chief Commander Michael. Not only did Christians begin to come to the spring for healing, but also pagans. In so doing, many of the pagans turned from their idols and were converted to the faith in Christ.

At this church of the holy Chief Commander Michael, a certain pious man by the name of Archippus served for sixty years as church custodian. By his preaching and by the example of his saintly life he brought many pagans to faith in Christ. With the general malice of that time towards Christians, and especially against Archippus, the pagans thought to destroy the church in order to prevent people from coming to that holy place of healing, and at the same time kill Archippus. 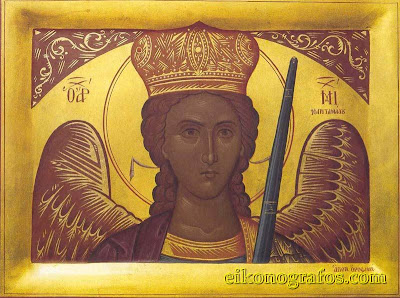 Reproduction of the Miraculous Icon of the Holy Archangel Michael of Mandamados (Icon courtesy of http://www.eikonografos.com/ used with permission)
Toward this end they made a confluence of the Lykokaperos and Kufos Rivers and directed its combined flow against the church. St Archippus prayed fervently to the Chief Commander Michael to ward off the danger. Through his prayer the Archangel Michael appeared at the temple, and with a blow of his staff, opened a wide fissure in a rock and commanded the rushing torrents of water to flow into it. The temple remained unharmed. Seeing such an awesome miracle, the pagans fled in terror. Archippus and the Christians gathered in church glorified God and gave thanks to the holy Archangel Michael for the help.

The place where the rivers plunged into the fissure received the name "Chonae", which means "plunging." The Chudov ("of the Miracle") monastery in Moscow is named for this Feast."
(taken from: http://ocafs.oca.org/FeastSaintsViewer.asp?SID=4&ID=1&FSID=102517)
For the full account of this feast from the Great Synaxaristes, see: http://www.johnsanidopoulos.com/2009/09/miracle-at-chonai-by-archangle-michael.html. 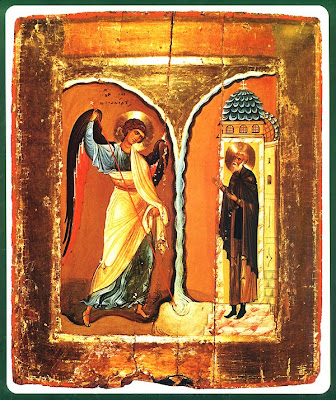 11th-12th Century Icon of the Miracle of Archangel Michael at Chonae, from St. Catherine's Monastery, Mount Sinai (taken from: http://ocafs.oca.org/FeastSaintsViewer.asp?SID=4&ID=1&FSID=102517)

Troparion - Tone 4
Michael, commander of the heavenly hosts, we who are unworthy beseech you, by your prayers encompass us beneath the wings of your immaterial glory, and faithfully preserve us who fall down and cry out to you: "Deliver us from all harm, for you are the commander of the powers on high!"
Kontakion - Tone 2
Michael, commander of God's armies and minister of the divine glory, prince of the bodiless angels and guide of mankind, ask for what is good for us, and for great mercy, as supreme commander of the Bodiless Hosts.
(hymns above taken from: http://www.oca.org/FStropars.asp?SID=13&ID=102517)
Prosomia of the Praises - First ToneLet us who dwell in the world now like angels keep the feast, * and unto God who is carried * on the throne of His glory * cry aloud the hymn, saying: “Father who art * in the heavens, Holy are You; * co-unoriginate Logos, Holy are You; * and all-holy Spirit, Holy are You.”
Since you are foremost in heaven, and have great freedom to speak, * O Chief Commander Michael, as you stand there in glory * near the unendurable throne of the Lord, * and behold things ineffable, * by your entreaties deliver us from distress * and temptations and from perils, we pray.
Among the bodiless Angels you are expressly the first. * O Chief Commander Michael, * an eye-witness and mystic * are you of that divine and resplendent light. * Hence we fervently pray to you: * Save us who piously honor you every year * and in faith extol the Trinity.
(taken from: http://sgpm.goarch.org/ematins/bilingual/Sep06.pdf)
Through the prayers of our Holy Fathers, Lord Jesus Christ our God, have mercy on us and save us! Amen!
Posted by Agioi_Anargyroi at 10:16 AM