St. Chrysostom Metropolitan of Smyrna the New Ethno-Hieromartyr, and those with him 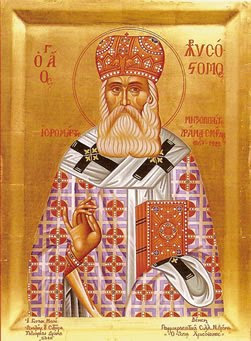 Icon of St. Chrysostom the New Ethno-Hieromartyr, Metropolitan of Smyrna (taken from: http://www.imdramas.gr/dt/view_dt.php?dt_id=36)
"To the angel of the church in Smyrna write: These are the words of him who is the First and the Last, who died and came to life again. I know your afflictions and your poverty—yet you are rich! I know the slander of those who say they are Jews and are not, but are a synagogue of Satan. Do not be afraid of what you are about to suffer. I tell you, the devil will put some of you in prison to test you, and you will suffer persecution for ten days. Be faithful, even to the point of death, and I will give you the crown of life. He who has an ear, let him hear what the Spirit says to the churches. He who overcomes will not be hurt at all by the second death."
Revelation 2:8-11
(http://www.biblegateway.com/passage/?search=Revelation+2&version=NIV)
The ethnomartyr Chrysostom Kalafatis was born in Triglia of Propontidas in 1867. He was the Metropolitan of Smyrna from 1910 until 1922. He studied at the theological school of Halki (1884-1891) and served as archdeacon to the Metropolitan of Mytilene Konstantinos Valiade, who was chosen to be Ecumenical Patriarch as Konstantinos V (1897). He was made chancellor of the Great Church and in 1902 he was ordained by the Patriarch Joachim III Metropolitan of Drama (1902-1910). His struggles against the Bulgarian propaganda and to stimulate the national morale disturbed the Sublime Porte, for which he was exiled from the Patriarchate in 1907. Separated bitterly from his flock, he traveled to Triglia with the hope of returning to the Metropolis of Drama, which he was able to do in 1908 with arise of the new Turkish constitution. The enthusiastic return which he was greeted with by the people of Drama was associated with the national struggle, and for this he was characterized by the Sublime Porte as dangerous to the public order. He was exiled anew from the Metropolis of Drama (on January 20th 1909) and went again to Triglia until the passing of the Metropolis of Smyrna (March 11th 1910). 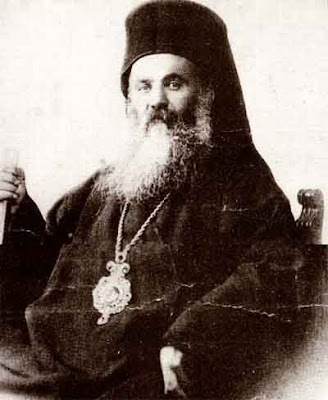 Photograph of St. Chrysostom of Smyrna (taken from: http://egolpio.com/AGIOLOGIO/xrusostomos_smurne.htm)
In the Metropolis of Smyrna he continued his national struggles, he organized an all-city rally to denounce the violence of the Bulgarians in Macedonia against the Greeks, supported by the Turkish authorities to the Bulgarian propaganda and general oppression of Sublime Porte against the Greeks of the Ottoman state. The Turkish authorities of the area were alarmed and cast him again from the Metropolis of Smyrna (1914), from which he returned after leaving for Moundrou (1918). During the Greek administration of Smyrna (1919-1922), he functioned as undisputed ethnarch of the Greeks of Asia Minor and the inspired leader of the “Asia Minor Defense" to create an autonomous state in the event of defeat of the Greek army. But the collapse of the Asia Minor front (August 1922) disappointed the ambitious Bishop, who objected to the plans of the Great Powers to remove the Greek presence from Asia Minor. The invasion of the Turks in Smyrna was the test of national vision. He refused to abandon his people, despite pressure from the consuls of England and France. On August 27, 1922 he was arrested by the Turkish commandant of the city Nourentin Pasha, after the end of the Divine Liturgy in the church of St. Photini, and was delivered to the angry Turkish mob. After horrible torture he found a martyric death. The spokesperson of the national aspirations became the symbol of the most tragic atrocities against the nation. His two-volume work On the Church, his articles in magazines Church Truth and Holy Polycarp, and his whole of preaching activities reveal this wonderful spiritual person of the ethnomartyr Hierarch.
(amateur translation and summary from: http://www.synaxaristis.googlepages.com/12σεπτεμβριου)

"I seek a great Cross, upon which I will put my pleasure to trial, I am called and I don’t have anything else of my own to give towards the salvation of our worshiping homeland, other than to give my blood. Thus I perceive of my life and the arch-priesthood...and the miter, which your holy hands placed upon my head, if it is called for, may the radiance of its stones never be destroyed; it will be converted to the crown of thorns of martyrdom of a hierarch."
(http://www.johnsanidopoulos.com/2010/09/saint-chrysostomos-of-smyrna.html)


The following is an actual account of the brutal lyching of St. Chrysostom:
"According to the French observers,...'The mob took possession of Metropolitan Chrysostom and carried him away,...a little further on, in front of an Italian hairdresser named Ismail...they stopped and the Metropolitan was slipped into a white hairdresser's overall. They began to beat him with their fists and sticks and to spit on his face. They riddled him with stabs. They tore his beard off, they gouged his eyes out, they cut off his nose and ears.' The French soldiers were disgusted by what they saw and wished to intervene, but their commanding officer was under orders to remain strictly neutral. At the point of a revolver, he forbade his men from saving the metropolitan's life. Chrysostom was dragged into a backstreet in the Iki Cheshmeli district, where he eventually died from his terrible wounds." Milton, Giles. Paradise Lost: Smyrna 1922: The Destruction of Islam's City of Tolerance. Hodder & Stoughton Ltd., London, 2008. pp.268-269.
(http://orthodoxwiki.org/Chrysostomos_(Kalafatis)_of_Smyrna)


I also heard somewhere that St. Chrysostom was ultimately dragged to and martyred at the place where St. Polycarp the Hieromartyr and the first Bishop of Smyrna also gave his life for Christ. Thus the beginning and end of Christ's Church in Smyrna were sealed with the precious blood of their shepherds. 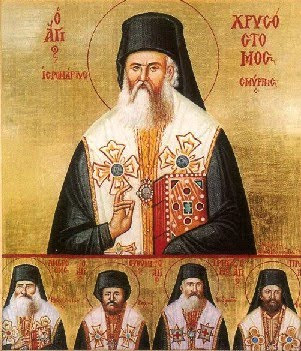 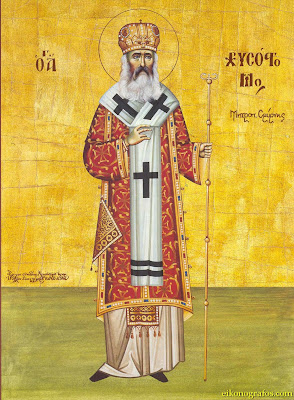 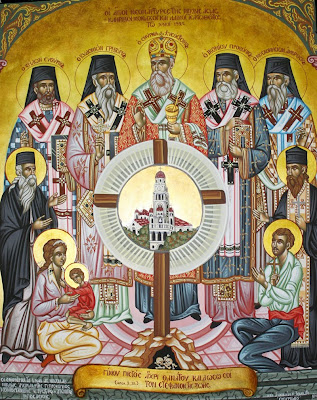 St. Chrysostom and his fellow Ethnomartyrs of Smyrna and Asia Minor (http://1.bp.blogspot.com/_gckoY4wjGCc/TI0XnTEsZjI/AAAAAAAAFTg/nyv5DUfZL2w/s1600/AGIOI+THS+SMYRNHS+1922x800.jpg)
Through the prayers of our Holy Fathers, Lord Jesus Christ our God, have mercy on us and save us! Amen!
Posted by Agioi_Anargyroi at 3:24 PM