The Holy Apostle Quadratus (Kodratos) of the Seventy, and the Epistle to Diognetos 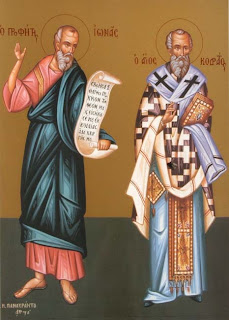 Icon depicting the Holy Prophet Jonah and St. Quadratus (Kodratos) the Apostle of the Seventy (Commemorated on September 21) (icon taken from: http://www.christopherklitou.com/icon_21_sept_jonah_prophet_codratus.htm)

"Saint Quadratus, Apostle of the Seventy preached the Word of God at Athens and at Magnesia (eastern peninsula of Thessaly), and was Bishop of Athens. His biographer called him "a morning star" among the clouds of paganism. He converted many pagans to the true faith in Christ the Savior, and his preaching aroused the hatred of the pagans. Once, an angry mob fell upon the saint to pelt him with stones. Preserved by God, St Quadratus remained alive, and they threw him into prison, where he died of starvation. His holy body was buried in Magnesia.

In the year 126, St Quadratus wrote an Apologia in defence of Christianity. Presented to the emperor Hadrian (117-138), the Apologia affected the persecution of Christians, since the emperor issued a decree saying that no one should be convicted without just cause. This Apologia was known to the historian Eusebius in the fourth century. At the present time, only part of this Apologia survives, quoted by Eusebius: "The deeds of our Savior were always witnessed, because they were true. His healings and raising people from the dead were visible not only when they were healed and raised, but always. They lived not only during the existence of the Savior upon the earth, but they also remained alive long after His departure. Some, indeed, have survived to our own time.

St Quadratus is also commemorated on January 4."
(taken from: http://ocafs.oca.org/FeastSaintsViewer.asp?FSID=102683) 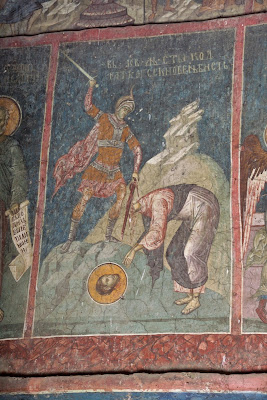 Fresco from Decani Monastery depicting the Martyrdom of the Holy Apostle Quadratus (taken from: http://www.srpskoblago.org/Archives/Decani/exhibits/Menologion/September/CX4K3369_l.html)

HYMN OF PRAISE
The Holy Apostle Quadratus
(by St. Nikolai Velimerovich)
St. Quadratus, like the morning star,
Shone forth the light of the Holy Gospel,
Shone forth rays through the thick darkness,
And grace upon empty hearts.
Quadratus dispelled the confusion of men's thoughts,
Illumining the forebodings in men's hearts,
Illumining them with the light of Christ,
And enlightening the world with Christ's wisdom.
Unbelievers converted to the Most-high God,
And received cruel wounds for Christ.
To Hadrian, the persecutor of the Cross,
Quadratus wrote a great defense
With the eloquence and the skill of the Hellenes
And the simplicity of Christian truth.
Quadratus succeeded: the emperor was persuaded
To protect the Holy Church from evil.
O Quadratus, Christ's disciple,
Wise defender of the Holy Church,
In word and deed, you were God's servant-
With unfading glory, you are now crowned!
To you, we Christians pray fervently:
Help us, O holy Apostle!
Help us to overcome misfortunes,
And to endure all sufferings for Christ.
(taken from: http://www.westsrbdio.org/prolog/prolog.htm)

"The Epistle of Mathetes to Diognetus is probably the earliest example of Christian apologetics, writings defending Christianity from its accusers. The Greek writer and recipient are not otherwise known, but the language and other textual evidence dates the work to the late 2nd century [citation needed]; some assume an even earlier date and count it among the Apostolic Fathers." (http://en.wikipedia.org/wiki/Epistle_to_Diognetus)

"P. Andriessen has suggested that Quadratus' Apology is the work known as Epistle to Diognetus,[3] a suggestion Michael W. Holmes finds "intreguing". While admitting that Epistle to Diognetus does not contain the only quotation known from Quadratus' address, Holmes defends this identification by noting "there is a gap between 7.6 and 7.7 into which it would fit very well." (http://en.wikipedia.org/wiki/Quadratus_of_Athens)

Regardless of whether or not the Apostle Quadratus is the author of this incredible document of early Christianity, it is worth reading, as it not only is one of the earliest Christian apologies, but also describes beautifully the life of the early Christians:


"For the Christians are distinguished from other men neither by country, nor language, nor the customs which they observe. For they neither inhabit cities of their own, nor employ a peculiar form of speech, nor lead a life which is marked out by any singularity. The course of conduct which they follow has not been devised by any speculation or deliberation of inquisitive men; nor do they, like some, proclaim themselves the advocates of any merely human doctrines. But, inhabiting Greek as well as barbarian cities, according as the lot of each of them has determined, and following the customs of the natives in respect to clothing, food, and the rest of their ordinary conduct, they display to us their wonderful and confessedly striking method of life. They dwell in their own countries, but simply as sojourners. As citizens, they share in all things with others, and yet endure all things as if foreigners. Every foreign land is to them as their native country, and every land of their birth as a land of strangers. They marry, as do all [others]; they beget children; but they do not destroy their offspring. They have a common table, but not a common bed. They are in the flesh, but they do not live after the flesh. They pass their days on earth, but they are citizens of heaven. They obey the prescribed laws, and at the same time surpass the laws by their lives. They love all men, and are persecuted by all. They are unknown and condemned; they are put to death, and restored to life. They are poor, yet make many rich; they are in lack of all things, and yet abound in all; they are dishonoured, and yet in their very dishonour are glorified. They are evil spoken of, and yet are justified; they are reviled, and bless; they are insulted, and repay the insult with honour; they do good, yet are punished as evil-doers. When punished, they rejoice as if quickened into life; they are assailed by the Jews as foreigners, and are persecuted by the Greeks; yet those who hate them are unable to assign any reason for their hatred." (taken from: http://www.earlychristianwritings.com/text/diognetus-roberts.html, the full text in Greek is available here: http://www.ccel.org/l/lake/fathers/diognetus.htm) 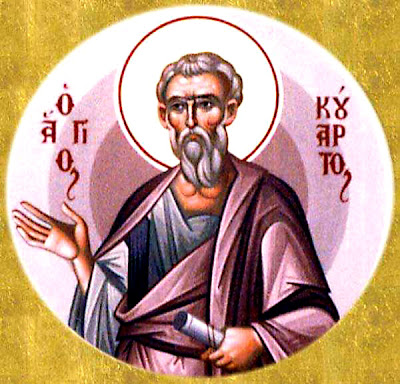 Icon of the Holy Apostle Quadratus (taken from: http://upload.wikimedia.org/wikipedia/commons/1/13/Apostol_Kodrat_from_Afinen.jpg)

Apolytikion in the Third Tone
O Holy Apostle Quadratus, intercede with the merciful God that He grant unto our souls forgiveness of offences.

Kontakion in the Plagal of the Fourth Tone
As a most honoured hierarch and athlete of great fortitude, the world doth offer Apostle Quadratus now to Thee, O Lord most merciful; as with hymns it doth honour his all-ven'rable memory, it doth ask of Thee through him to grant forgiveness of failings to them that sing his praise.(taken from: http://goarch.org/chapel/saints_view?contentid=212)

Through the prayers of our Holy Fathers, Lord Jesus Christ our God, have mercy on us and save us! Amen!
Posted by Agioi_Anargyroi at 9:28 AM