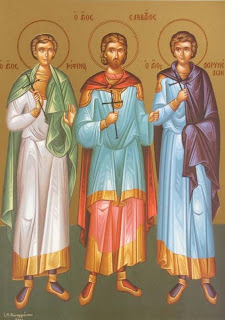 The Holy Martyrs Trophimus, Sabbatius and Dorymedon - Commemorated on September 19 (icon taken from: http://christopherklitou.com/icon_19_sept_trophimus_sabbatius_dorymedon.htm)
"In the third century, during the reign of Emperor Probus, when Atticus was governing Antioch, two Christians, Trophimus and Sabbatius, both eminent and honorable citizens, came to that city. They arrived just as a pagan festival and sacrificial offerings to the idol of Apollo were taking place at nearby Daphne. Atticus made every effort to ensure that all citizens took part in this festivity. When someone noticed that Trophimus and Sabbatius were not participating in the festivity, he told Atticus. Atticus brought them to trial, and when they refused to renounce Christ he subjected them to tortures, one after the other. After he beat and tortured Trophimus, Atticus sent him to Phrygia to Dionysius, an even crueler torturer of Christians. Then Atticus took Sabbatius from prison and began to try him. When the torturer asked Sabbatius who he was and what his rank was, he replied: ``My rank and dignity and homeland and glory and wealth is Christ, the Son of God, Who lives forever, and by Whose providence the universe exists and is governed.'' For that, he was beaten and torn and scraped with an iron implement until the bones showed through beneath his flesh. Under these tortures he reposed. In Phrygia, the torturer Dionysius subjected Trophimus to great torture, then kept him in prison for even greater tortures. A certain senator Dorymedon, a secret Christian, came to the prison and ministered to Trophimus. When the torturer learned of this, he began to torture both of them in the same way, and finally threw them to the wild beasts, but the wild beasts did not touch them. Holy Dorymedon even shouted at the she-bear, pulling her ears so that she would tear him apart, but in spite of all that, the bear became gentler. In the end, the torturer ordered that Saints Trophimus and Dorymedon be beheaded with the sword. The souls of both of these holy martyrs now reign in heaven." (taken from: http://www.westsrbdio.org/prolog/prolog.htm) 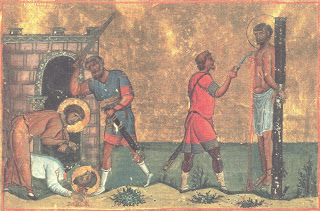 The Martyrdom of Sts. Trophimos, Sabbatios, & Dorymedon, from the Menologion of Basileiou (taken from: http://vatopaidi.files.wordpress.com/2009/09/saints-trophimus-sabbatius-and-dorymedon1.jpg)
Second account
"In 278, during the reign of Probus, Saints Trophimus and Sabbatius came to Antioch, and seeing the city celebrating the festival of Apollo at Daphne lamented the blindness of the people, and presented themselves as Christians to Atticus the Governor. Saint Trophimus was stripped of his clothing, and was stretched out and beaten until the earth was red with his blood. Then he was hung up, scraped on his sides, and imprisoned in torments. Saint Sabbatius was tortured so savagely that he gave up his spirit in his sufferings. Trophimus was sent to Synnada, wearing iron shoes fitted with sharp iron nails within; he was further tormented without mercy, then cast into prison. Dorymedon, a counsellor, and a pagan, came to the prison and cared for Trophimus. When a certain feast came, Dorymedon was asked why he did not sacrifice to the idols; he proclaimed himself a Christian, for which he was imprisoned, pierced with heated spits, frightfully punished, and finally beheaded with Saint Trophimus." (taken from: http://goarch.org/chapel/saints_view?contentid=210)


Detail from a fresco of the Martyrdom of Sts. Trophimos, Sabbatios, & Dorymedon, from Decani Monastery (taken from: http://www.srpskoblago.org/Archives/Decani/exhibits/Menologion/September/CX4K3358_l.html)
Troparion - Tone 8
God praised in Trinity has glorified a trinity of martyrs: Trophimus, Sabbatius, and Dorymedon. By their faith, they overthrew the adversary. Through their prayers, O Christ our God, have mercy on us.

Kontakion - Tone 8
As the foundation of athletes and the confirmation of piety the Church honors and glorifies your brilliant suffering,wise and glorious Trophimus, ever-praised and blessed athlete. Together with your fellow sufferers, ask cleansing for those who hymn you, for you are invincible.
(taken from: http://www.oca.org/FStropars.asp?SID=13&ID=102664)
Through the prayers of our Holy Fathers, Lord Jesus Christ our God, have mercy on us and save us! Amen!
Posted by Agioi_Anargyroi at 11:22 AM