St. Ludmilla the Martyr, Grandmother of St. Wenceslaus the Prince of the Czechs 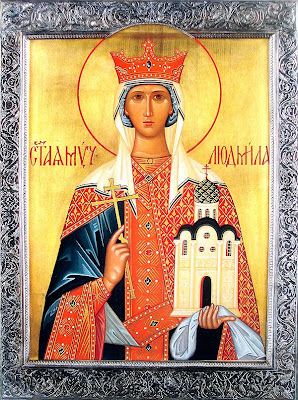 St. Ludmilla the Martyr, Grandmother of St. Wenceslaus the Prince of the Czechs - Commemorated on September 16 (icon taken from: http://ocafs.oca.org/FeastSaintsViewer.asp?SID=4&ID=1&FSID=102633; another icon depicting Sts. Ludmilla and Wenceslaus along with other Saints available here: http://www.skete.com/index.cfm?fuseaction=product.display&Product_ID=1259&Category_ID=97)

"The Holy Martyr Ludmilla, a Czech (Bohemian) princess, was married to the Czech prince Borivoy. Both spouses received holy Baptism from St Methodius, Archbishop of Moravia and Enlightener of the Slavs (Comm. 11 May).

As Christians, they showed concerned for the enlightening of their subjects with the light of the true Faith, they built churches and invited priests to celebrate the divine services. Prince Borivoy died early at age 36. St Ludmilla, as a widow, led an austere, pious life and continued to be concerned for the Church during the reign of her son Bratislav, which lasted for 33 years. 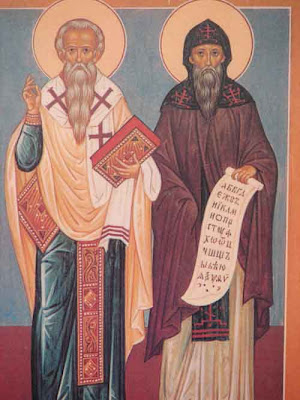 Icon of Sts. Cyril and Methodius - Commemorated May 11th (icon taken from: http://upload.wikimedia.org/wikipedia/commons/c/cf/Cyril_Methodius25K.jpg)

Bratislav was married to Dragomira, with whom he had a son, Vyacheslav [also known as St. Wenceslaus, commemorated September 28th and March 4th]. After the death of Bratislav, eighteen-year-old Vyacheslav came on the throne. Taking advantage of the inexperience and youth of her son, Dragomira began to introduce pagan manners and customs in the country.
St Ludmilla, of course, opposed this. Dragomira came to hate her mother-in-law and tried to destroy her. When St Ludmilla moved away to the city of Techin, Dragomira sent two boyars in secret to murder her. St Ludmilla was praying at the time, and the two assassins entered the house and carried out Dragomira's orders.
The relics of the holy Martyr Ludmilla was buried in Techin in the city wall. Numerous healings occurred at her grave. Prince Vyacheslav transferred the body of St Ludmilla to the city of Prague and placed it in the church of St George."
(taken from: http://ocafs.oca.org/FeastSaintsViewer.asp?SID=4&ID=1&FSID=102633) 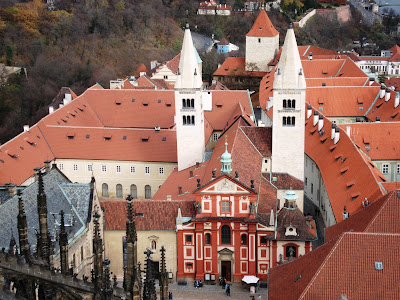 Picture of the Church of St. George in Prague (taken from: http://en.wikipedia.org/wiki/File:Prague_Castle_St_George.JPG)
Through the prayers of our Holy Fathers, Lord Jesus Christ our God, have mercy on us and save us! Amen!
Posted by Agioi_Anargyroi at 2:11 PM