Miraculous icon of the Theotokos Tselitel'nitsa ("the Healer") 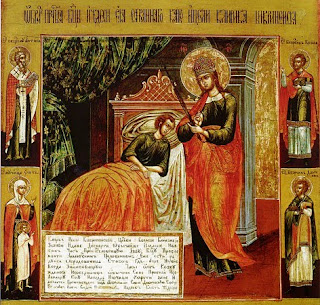 Miraculous icon of the Theotokos Tselitel'nitsa ("the Healer") - Commemorated on September 18 (icon taken from: http://days.pravoslavie.ru/Images/ii3019&1276.htm)
"The original icon known as "Tselitel'nitsa," or "The Healer" was from the Tsilkan church in Kartali, Georgia. It was painted at the time of St Nino (January 14).

There is another icon with the same name in the Alexeev women's monastery in Moscow, and many miracles took place before it at the end of the eightheenth century. St Demetrius of Rostov (September 21 and October 28) relates a story about this icon in his book THE BEDEWED FLEECE.

A cleric of the Navarninsky church, Vincent Bulvinensky, was in the habit of venerating the icon of the Mother of God whenever he entered the church. He would also recite the following prayer before the icon: "Hail, Virgin Theotokos full of grace, the Lord is with Thee. Blessed is the womb which bore Christ, and the breasts which nourished the Lord God, our Savior."

In time, he found himself suffering from a dreadful affliction. His tongue began to putrefy, and he passed out from the pain. When he came to himself, he prayed his usual prayer to the Most Holy Theotokos.

As soon as he had finished his prayer, he saw a handsome young man at the head of his bed. The sufferer realized at once that this was his guardian angel. The angel looked at him with pity, calling on the Mother of God to heal him. Suddenly, the Theotokos appeared and healed the sick man who was so devoted to Her. He got out of bed and went to church, taking his place on the cliros for the service. Those present were astonished to see his recovery.

This miracle inspired the painting of "The Healer" icon depicting the Mother of God standing at the bed of the sick man." (taken from: http://ocafs.oca.org/FeastSaintsViewer.asp?SID=4&ID=1&FSID=102662)

See previous post for the account of a separate icon of the Theotokos Giatrissa "the Healer" from Loutraki: http://full-of-grace-and-truth.blogspot.com/2009/09/miraculous-icon-of-panagia-giatrissa.html. 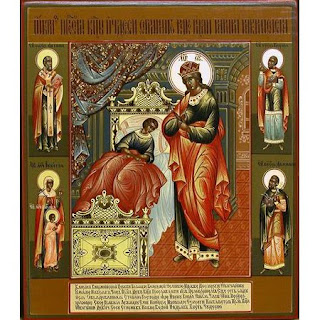 Icon of the Theotokos Tselitel'nitsa (taken from: http://www.ikony.ru/products_pictures/vla-61108.jpg)
Troparion - Tone 4
From your holy icon, O Lady Theotokos, salvation and healing is granted abundantly to all those who come to you with love and faith; visit also my infirmity and show mercy to my soul, O Good One, and heal my body by your grace.
(taken from: http://www.oca.org/FStropars.asp?SID=13&ID=102662)
Most-Holy Theotokos save us!
Posted by Agioi_Anargyroi at 9:31 AM

Labels: Icons of the Theotokos