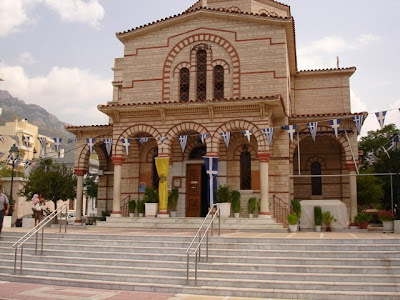 Every summer a woman named Mary who was a midwife used to visit Loutraki for its spring waters. She stayed with Marias Sokou with whom she had a friendship. When that Mary went to venerate the Holy Land, she brought Marias Sokou as a present the icon of Virgin Mary with the baby Christ in her left side. In Jerusalem, the salesman had told Maria to give the icon to God-fearing people who believed in her, and to light candles for her and an oil-lamp to burn all day and night because it was a miraculous icon.

Mary told Maria Sokou all these. She also told her that 20 days after the delivery of the icon she was to die, which happened.

The icon came into the hands of Sokou in 1928. The reverence of the residents of Loutraki as well as the foreigners was growing gradually. They then thought to build a church. A committee was developed with the aid of the then bishop Damaskinos of Corinth and they built in a building ground which was granted by John Marras, opposite from today’s church where was the first church of Panagia Giatrissa, which was thus named because of the wondrous healings which she performed.
(source) 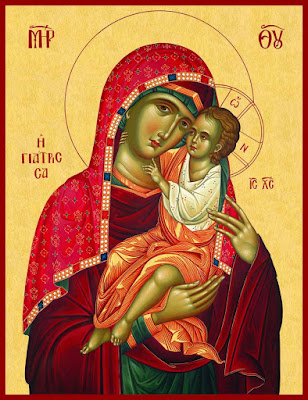 Modern Byzantine rendition of the Icon of the Theotokos "Giatrissa" ("The Healer") (source)
The following is a short interpretation on the icon of Panagia Giatrissa from St. Issac's Skete:
"As any good doctor would direct us in applying the right medicine, the “Birth-Giver of God” (in Greek “Theotokos”) directs us to her Son and God, the true Physician of our hearts and our souls. Often people wonder just what the message of the Virgin is to us and to the Church. Actually it is very simple: first of all, look at Whom I am carrying in my arms, for He is our Life, our Saviour, and our Hope; and second, as she said to those at the wedding in Cana of Galilee, “whatsoever He saith unto you, do it.” (John 2:5) The Virgin Mary’s whole life is dedicated to serving God and ministering to His Son, and after His repose to visiting the Holy Places associated with His life and nourishing the Apostles’ spirits.

Taken up bodily into Heaven by Christ after she had died a mortal death as a pledge of the Resurrection of all on the Last Day, she is a great intercessor and a profound revelation as an icon of her Son, Who shines forth in her even today. We are all meant to be illumined icons of Christ, for we were made in His Image and Likeness, but we often don’t see this exalted ideal reached by continuous humility. God give us the strength to act accordingly!"
(source) 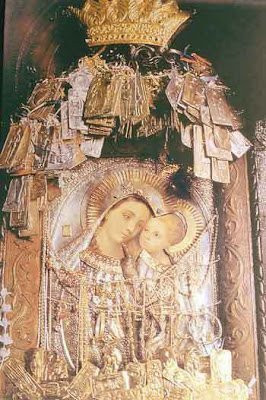 Miraculous icon of Panagia Giatrissa, Loutraki. Covering the icon are signs of the many healings worked by the Theotokos. (source) 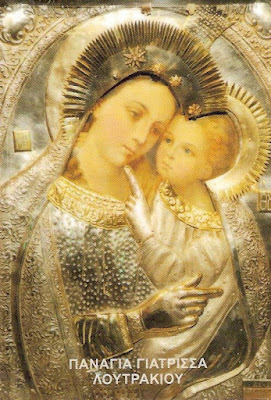 Fragrant nectar of the Theotokos, precious Throne of the King of All, you pour forth fragrance O Virgin to Your servants, for You held God in your womb, fill us with all divine grace, therefore now, we all ever preach and glorify You as the true Mother of God.

(amateur translation, taken from Greek text from the Paraklesis of Panagia Giatrissa: http://www.pigizois.net/latreia/paraklitikoi_kanones/pdf/paraklisi_theotoko_giatrisa.pdf) 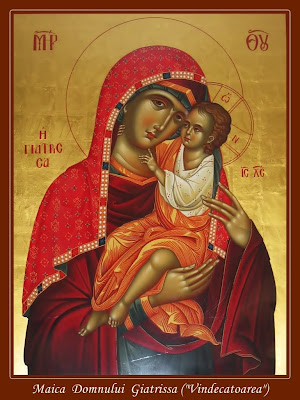 Most-Holy Theotokos save us!
Posted by Agioi_Anargyroi at 7:40 AM

Thank you for posting. It is beautiful to behold and to contemplate.

Where can this icon be found, this exact same colorful one?

Where can this exact icon be found?

I'm not totally sure. I seem to remember seeing that it was painted on the Holy Mountain, possibly at the Skete of St. Nicholas, Bourazeri, but I can't confirm that. It is a truly beautiful icon, nonetheless.