Sts. Porphyrios the Mime and Genesius the Actor 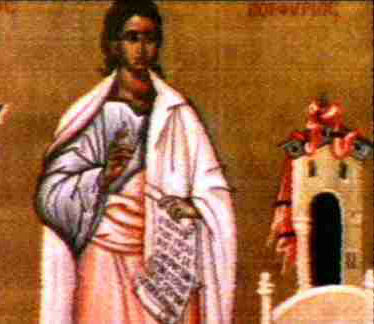 The Holy Martyr Porphyrius - Commemorated on September 15th, and possibly also on November 4th (icon taken from: http://image051.mylivepage.com/chunk51/1371783/1687/%CE%91%CE%93%CE%99%CE%9F%CE%A3-%CE%A0%CE%9F%CE%A1%CE%A6%CE%A5%CE%A1%CE%99%CE%9F%CE%A3.jpg; higher resolution additional icon available from Aperges.com at: http://www.aperges.com/view_item.php?id=1405)
"Porphyrius was born in Mimosa. At first, he made jests about Christians for the Emperor Julian the Apostate. Thus, on one occasion, while parodying the Christian Mystery of Baptism, he immersed himself in water, pronouncing the words: ``In the name of the Father and the Son and the Holy Spirit!'' When he emerged from the water he cried out: ``Now I am a Christian!'' Everyone thought that this was just another jest, but he remained steadfast, ceased to mock Christianity, and finally suffered for Christ. Porphyrius was beheaded in the year 361, and took up his habitation in the Kingdom of Christ. 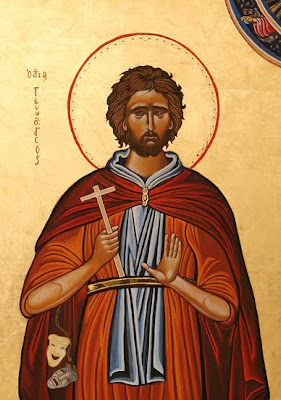 Icon of St. Genesius the Actor of Rome (taken from: http://www.breviary.net/martyrology/mart08/mart0825.htm)
REFLECTION
God is not mocked (Galatians 6:7). God either punishes the mockers in order to correct them or He converts them into that which they had mocked. Initially, St. Porphyrius was famous among the pagans as a mocker of Christianity. On one occasion, he was mocking the Christian Mystery of Baptism before Emperor Julian the Apostate and his retinue. But something totally unexpected happened. When Porphyrius immersed himself in the water and pronounced the words of baptism in the name of the Holy Trinity, his spirit was suddenly changed, and he became a true Christian. Instead of mocking the Christian Faith, he began to denounce the emperor for his impure idolatry, for which he was tortured and beheaded. A similar thing happened to the comedian Gennesus [August 25th], probably in Diocletian's time. This Gennesus parodied the Christian Divine Liturgy before a crowd of pagans, amusing them with his mockeries and witticisms. Suddenly, he changed, and cried out before the people: ``I believe, and I desire to be baptized.'' At first, the spectators thought his words were a part of his farce, but he repeated his statement of faith in Christ. When Gennesus remained steadfast in his new faith, even when interrogated by the court and the emperor himself, he was tortured and slain. Thus, the mocker of Christ became a martyr for Christ."
(taken from: http://www.westsrbdio.org/prolog/prolog.htm)

Through the prayers of our Holy Fathers, Lord Jesus Christ our God, have mercy on us and save us! Amen!
Posted by Agioi_Anargyroi at 1:39 PM