The Indiction (Ecclesiastical New Year), and the Orthodox Day of the Protection of the Environment 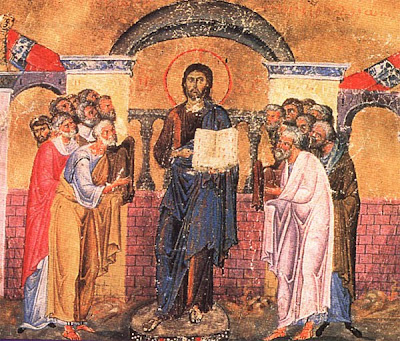 Icon of Christ preaching in the Synagogue in Nazareth. "According to Holy Tradition, Christ entered the synagogue on September 1 to announce His mission to mankind (Luke 4:16-22). Quoting Isaiah 61:1-2), the Savior proclaimed, "The spirit of the Lord is upon me; because He has anointed me to preach the gospel to the poor; He has sent me to proclaim release to captives, and recovering of sight to the blind, to set at liberty those who are oppressed, to proclaim the acceptable year of the Lord…" This scene is depicted in a Vatican manuscript (Vatican, Biblioteca. Cod. Gr. 1613, p.1)." (taken from: http://ocafs.oca.org/FeastSaintsViewer.asp?SID=4&ID=1&FSID=501)


The Indiction (Ecclesiastical New Year), and the Orthodox Day of the Protection of the Environment - Celebrated September 1st
Reading:
"For the maintenance of their armed forces, the Roman emperors decreed that their subjects in every district should be taxed every year. This same decree was reissued every fifteen years, since the Roman soldiers were obliged to serve for fifteen years. At the end of each fifteen-year period, an assessment was made of what economic changes had taken place, and a new tax was decreed, which was to be paid over the span of the fifteen years. This imperial decree, which was issued before the season of winter, was named Indictio, that is, Definiton, or Order. This name was adopted by the emperors in Constantinople also. At other times, the latter also used the term Epinemisis, that is, Distribution (Dianome). It is commonly held that Saint Constantine the Great introduced the Indiction decrees in A.D. 312, after he beheld the sign of the Cross in heaven and vanquished Maxentius and was proclaimed Emperor in the West. Some, however (and this seems more likely), ascribe the institution of the Indiction to Augustus Caesar, three years before the birth of Christ. Those who hold this view offer as proof the papal bull issued in A.D. 781 which is dated thus: Anno IV, Indictionis LIII -that is, the fourth year of the fifty-third Indiction. From this, we can deduce the aforementioned year (3 B.C.) by multiplying the fifty-two complete Indictions by the number of years in each (15), and adding the three years of the fifty-third Indiction. There are three types of Indictions: 1) That which was introduced in the West, and which is called Imperial, or Caesarean, or Constantinian, and which begins on the 24th of September; 2) The so-called Papal Indiction, which begins on the 1st of January; and 3) The Constantinopolitan, which was adopted by the Patriarchs of that city after the fall of the Eastern Empire in 1453. This Indiction is indicated in their own hand on the decrees they issue, without the numeration of the fifteen years. This Indiction begins on the 1st of September and is observed with special ceremony in the Church. Since the completion of each year takes place, as it were, with the harvest and gathering of the crops into storehouses, and we begin anew from henceforth the sowing of seed in the earth for the production of future crops, September is considered the beginning of the New Year. The Church also keeps festival this day, beseeching God for fair weather, seasonable rains, and an abundance of the fruits of the earth. The Holy Scriptures (Lev. 23:24-5 and Num. 29:1-2) also testify that the people of Israel celebrated the feast of the Blowing of the Trumpets on this day, offering hymns of thanksgiving. In addition to all the aforesaid, on this feast we also commemorate our Saviour's entry into the synagogue in Nazareth, where He was given the book of the Prophet Esaias to read, and He opened it and found the place where it is written, "The Spirit of the Lord is upon Me, for which cause He hath anointed Me..." (Luke 4:16-30).
It should be noted that to the present day, the Church has always celebrated the beginning of the New Year on September 1. This was the custom in Constantinople until its fall in 1453 and in Russia until the reign of Peter I. September 1 is still festively celebrated as the New Year at the Patriarchate of Constantinople; among the Jews also the New Year, although reckoned according to a moveable calendar, usually falls in September. The service of the Menaion for January 1 is for our Lord's Circumcision and for the memorial of Saint Basil the Great, without any mention of its being the beginning of a new year."
(taken from: http://goarch.org/chapel/saints_view?contentid=188)
"Tradition says that the Hebrews entered the Promised Land in September."
(http://ocafs.oca.org/FeastSaintsViewer.asp?SID=4&ID=1&FSID=501) 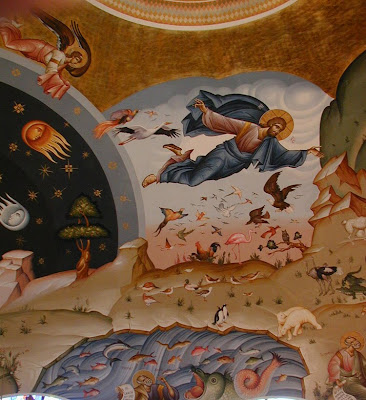 Detail from a fresco from St. Paraskevi Shrine, Greenlawn, NY of the Creation (taken from: http://stparaskevi.org/dome_animals1.jpg)


On this day the Orthodox also offer special prayers to God to protect the environment, which because of our sins is continuously being harmed. The following is from the Synaxarion of the service for the Protection of the Environment (available in English here: http://www.anastasis.org.uk/environm.htm)
On the same day, the beginning of the Indiction, we entreat our God, who loves mankind, for the welfare of the earth on which we live and for the whole creation.
Verses
We fall before you, Master, as we cry:
O Saviour, from pollutions free the earth. 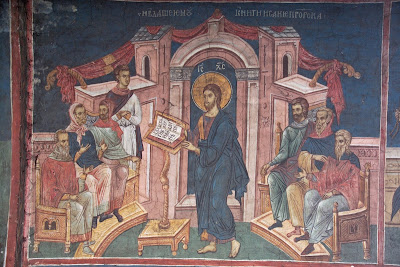 Fresco of Christ preaching at the Synagogue in Nazareth (taken from: http://www.srpskoblago.org/Archives/Decani/exhibits/Collections/PublicMinistry/CX4K3056_l.html)


Apolytikion for the Indiction in the Second Tone
Creator of the universe, setting times and seasons by Your sole authority, bless the cycle of the year of Your grace, O Lord, guarding our rulers and Your nation in peace, at the intercession of the Theotokos, and save us.
Kontakion in the Fourth Tone
You who created all things in Your infinite wisdom, and set the times by Your own authority, grant Your Christian people victories. Blessing our comings and goings throughout this year, guide our works according to Your divine will.
(taken from: http://goarch.org/chapel/saints_view?contentid=188)
Apolytikion for the Protection of the Environment - Tone 4. Speedily anticipate.
Lord and Saviour, who as God brought all things into being by a word, establishing laws and governing them unerringly to your glory, at the prayers of the Mother of God, keep secure and unharmed all the elements which hold the earth together, and save the universe.
(taken from: http://www.anastasis.org.uk/environm.htm; see the link for the entire service in English)
Through the prayers of our Holy Fathers, Lord Jesus Christ our God, have mercy on us and save us! Amen!
Posted by Agioi_Anargyroi at 10:22 AM

Labels: The Environment, The Indiction