Sts. Zacharias the Prophet and Elizabeth the Righteous, the Parents of the Precious Forerunner 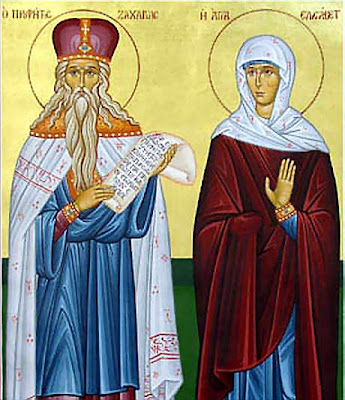 Sts. Zacharias the Prophet and Elizabeth the Righteous, the Parents of the Precious Forerunner - Commemorated on September 5th (icon taken from: http://www.rel.gr/photo/displayimage.php?pid=1302&fullsize=1)
"The Holy Prophet Zachariah and the Righteous Elizabeth were the parents of the holy Prophet, Forerunner and Baptist of the Lord, John. They were descended from the lineage of Aaron: St Zachariah, son of Barach, was a priest in the Jerusalem Temple, and St Elizabeth was the sister of St Anna, the mother of the Most Holy Theotokos. The righteous spouses, "walking in all the commandments of the Lord (Luke 1:6), suffered barrenness, which in those times was considered a punishment from God. 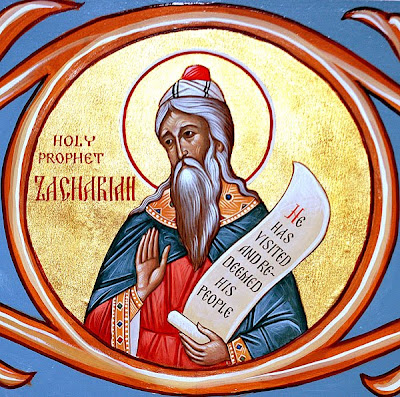 Icon of the Holy Prophet Zacharias (taken from: http://ocafs.oca.org/FeastSaintsViewer.asp?FSID=102502)

Once, during his turn of priestly service in the Temple, St Zachariah was told by an angel that his aged wife would bear him a son, who "will be great in the sight of the Lord" (Luke 1:15) and "will go before Him in the spirit and power of Elias" (Luke 1:17). 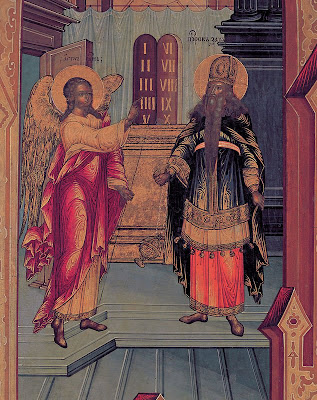 Icon of the Archangel Gabriel appearing to St. Zacharias (taken from: http://2.bp.blogspot.com/_GcLAjo-5_CM/SkACX1zMa7I/AAAAAAAAGVI/okBZfFoIw_o/s1600-h/Zechariah01.jpg; see the following link for more information: http://goarch.org/chapel/saints/215)

Zachariah doubted that this prediction would come true, and for his weakness of faith he was punished by becoming mute. When Elizabeth gave birth to a son, through the inspiration of the Holy Spirit she announced that his name was John, although no one in their family had this name.
They asked Zachariah and he also wrote the name John down on a tablet. Immediately the gift of speech returned to him, and inspired by the Holy Spirit, he began to prophesy about his son as the Forerunner of the Lord. 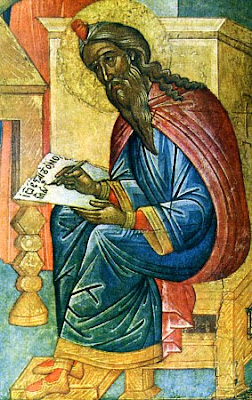 The Holy Prophet Zacharias writing: "His name shall be John" (http://days.pravoslavie.ru/Images/ii823&560.htm)

When King Herod heard from the Magi about the birth of the Messiah, he decided to kill all the infants up to two years old at Bethlehem and the surrounding area, hoping that the new-born Messiah would be among them. 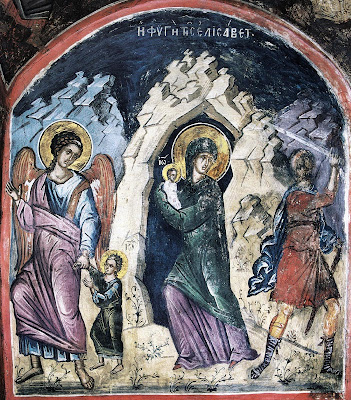 Herod knew about John's unusual birth and he wanted to kill him, fearing that he was the foretold King of the Jews. But Elizabeth hid herself and the infant in the hills. The murderers searched everywhere for John. Elizabeth, when she saw her pursuers, began to implore God for their safety, and immediately the hill opened up and concealed her and the infant from their pursuers. 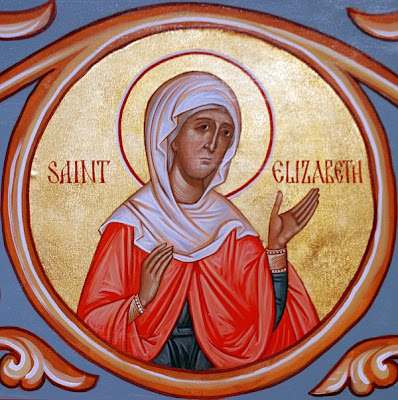 Icon of St. Elizabeth the Righteous (taken from: http://ocafs.oca.org/FeastSaintsViewer.asp?FSID=102503)

In these tragic days St Zachariah was taking his turn at the services in the Temple. Soldiers sent by Herod tried in vain to learn from him the whereabouts of his son. Then, by command of Herod, they murdered this holy prophet, having stabbed him between the temple and the altar (MT 23: 35). Elizabeth died forty days after her husband, and St John, preserved by the Lord, dwelt in the wilderness until the day of his appearance to the nation of Israel. 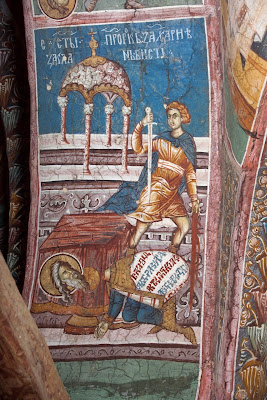 Fresco depicting the martyrdom of St. Zacharias in the Temple (taken from: http://www.srpskoblago.org/Archives/Decani/exhibits/Menologion/September/CX4K3404_l.html)

On the Greek calendar, Sts Zachariah and Elizabeth are also commemorated on June 24, the Feast of the Nativity of St John the Baptist."
(taken from: http://ocafs.oca.org/FeastSaintsViewer.asp?SID=4&ID=1&FSID=102502) 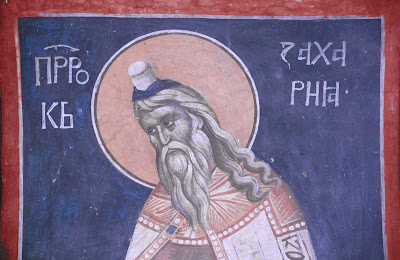 Fresco of the Holy Prophet Zacharias (taken from: http://www.srpskoblago.org/Archives/Gracanica/exhibits/digital/s5-w4w5/large/s5-w4w5-3.jpg)

REFLECTION
(by St. Nikolai Velimirovich)
"Men strive in vain to discover those things that God intentionally conceals from them. If God had not permitted, men would never have found gold and silver beneath the earth, or the power of steam or the glow of electrical light. In vain, Herod slaughtered countless children in Bethlehem in order to slay One. That One was hidden from the sight and sword of Herod. In vain did Herod seek John. Behold the wonder: soldiers pursued the aged Elizabeth, who was fleeing with John in her arms-and could not catch up with her! The enraged Herod summoned Zacharias and demanded: ``Give me your son John!'' The aged priest meekly replied: ``I am now serving the Lord God of Israel. I know not where my son is.'' Insane with rage, Herod ordered Zacharias slain in place of John. The servants of the king entered the Temple and asked Zacharias: ``Where have you hidden your son? Give him to us for the king has so ordered. If you do not give him to us, you yourself will die.'' Zacharias replied: ``You will kill my body but the Lord will receive my soul.'' Thus Zacharias was slain, but Herod was not content with that. The wicked king had no peace, day or night, for he was tormented by a foreboding that John could be that newborn king proclaimed by the Magi from the East. Herod tried to find him, but in vain, for God had intentionally hidden him."
(taken from: http://www.westsrbdio.org/prolog/prolog.htm) 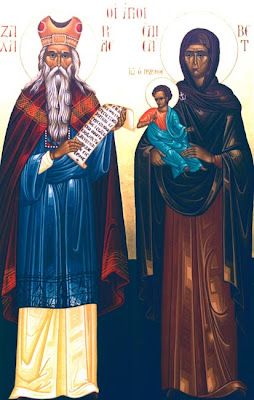 Icon of Sts. Zacharias and Elizabeth, with their son, St. John the Forerunner (taken from: http://christopherklitou.com/icon_5_sept_24_june_zacharias_elisabeth.htm)
Troparion - Tone 2
The memory of Your prophets Zachariah and Elizabeth We celebrate today, O Lord. By their prayers, we beseech You, O Christ God, save our souls!
(taken from: http://www.oca.org/FStropars.asp?SID=13&ID=102502)


Apolytikion in the Fourth Tone
In the vesture of a priest, according to the Law of God, thou didst offer unto Him well-pleasing whole-burnt offerings, as it befitted a priest, O wise Zacharias. Thou wast a shining light, a seer of mysteries, bearing in thyself clearly the signs of grace; and in God's temple, O wise Prophet of Christ God, thou wast slain with the sword. Hence, with the Forerunner, make entreaty that our souls find salvation.


Kontakion in the Third Tone
On this day the Prophet and ven'rable priest of the Most High, even Zacharias, who begat the Forerunner, hath now mixed for us the draught of virtue and set the table of his sacred mem'ry nourishing all the faithful; for this cause do we extol him as a most godly initiate of grace divine.
(taken from: http://goarch.org/chapel/saints_view?contentid=194) 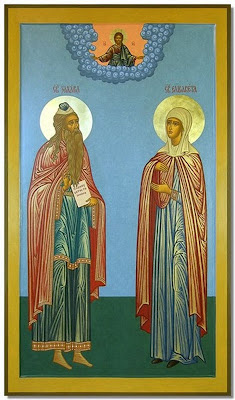 Sts. Zacharias and Elizabeth, the parents of the Precious Forerunner (http://days.pravoslavie.ru/jpg/ih3523.jpg)


Through the prayers of our Holy Fathers, Lord Jesus Christ our God, have mercy on us and save us! Amen!
Posted by Agioi_Anargyroi at 1:18 PM

Labels: Lives of the Saints, St. John the Forerunner

Do you have a source for the icon of St. Elizabeth "Fleeing..."; I tried to trace the link you have and was unsuccessful in finding a source (other than a larger version of the graphic image, etc.). I like this icon and would very much like to find it - any information you are able to provide is greatly appreciated.

It is a 16th century fresco from Dionysiou Monastery, Mount Athos. It is also hosted by the following site: http://pravicon.com/images/sv/s0772/s0772004.jpg.