St. Chariton the Confessor of Palestine 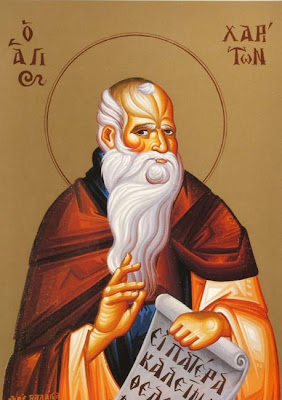 St. Chariton the Confessor of Palestine - Commemorated on September 28th (icon taken from: http://christopherklitou.com/icon_28_sept_chariton.htm)
"Chariton was a distinguished and devout citizen of the city of Iconium. Imbued with the spirit of his compatriot, St. Thecla, Chariton openly confessed the name of Christ. When a bitter persecution of Christians began during the reign of Emperor Aurelian, Chariton was immediately brought to trial before the eparch. The judge ordered him to worship the gods, but Chariton replied: ``All your gods are demons, and were cast from the heavens into the nethermost hell.'' Chariton clearly proclaimed his faith in the One Living God, the Creator of all, and the Lord Jesus, the Savior of mankind. The eparch ordered that he be tortured and beaten, until his whole body was like one great wound. When Aurelian's evil deeds caught up with him and he died an evil death, Chariton was freed from torture and prison. He then set out for Jerusalem. On the way he was seized by robbers, but escaped from them by God's providence. Chariton, not wanting to return to Iconium again, withdrew to the wilderness of Pharan, where he founded a monastery and gathered monks. He established a rule for the monastery and then, to avoid the praise of men, withdrew to another wilderness near Jericho. There he founded another monastery called the Monastery of Chariton. Finally, he founded a third monastery, Souka, which the Greeks called the Old Lavra. Chariton died at a great old age, and took up his abode in the glory of his Lord on September 28, 350. His relics repose in his first monastery. The composition of the rite of monastic tonsure is attributed to St. Chariton.

REFLECTION
In guiding the dispensation of this world, and especially of His Holy Church, God often makes unexpected moves, and changes the evil destiny of His servants to the good. This occurred many times in the life of St. Chariton. Following cruel tortures, Chariton was thrown into prison and was promised certain death. Then, Emperor Aurelian died unexpectedly, and the new emperor freed the Christian captives. Thus, Chariton escaped death. Then, when he was traveling to Jerusalem, robbers seized him and took him to their cave. They left him there, and went off to rob and plunder, with the intention of killing him when they came back. In this cave there was a wine cask into which a poisonous snake had crawled, drunk of the wine, and vomited its venom into the cask. When the robbers returned, tired and thirsty from the heat, they drank the venomous wine and, one by one, fell dead. And thus, St. Chariton was saved from death by yet another unexpected event. The Lord heaped misfortunes upon His servant, in order that by these misfortunes He would temper and purify him as gold is tempered and purified by fire, and that He might bind him even more securely to Himself. He delivered him from death, because Chariton had yet to establish several monasteries where, by his ascetic example, he would direct many human souls on the path of salvation." (taken from: http://www.westsrbdio.org/prolog/prolog.htm)

St. Chariton the Righteous Confessor of Palestine (icon taken from: http://ocafs.oca.org/FeastSaintsViewer.asp?SID=4&ID=1&FSID=102742)
Apolytikion in the Fourth Tone
With the rivers of your tears, you have made the barren desert fertile. Through sighs of sorrow from deep within you, your labors have borne fruit a hundred-fold. By your miracles you have become a light, shining upon the world. O Chariton, our Holy Father, pray to Christ our God, to save our souls.

Kontakion in the Second Tone
Delighting in abstinence, O godly-minded one, and reining in the desires of thy flesh, thou wast seen to be increasing in faith. And thou didst blossom forth like the tree of life in the midst of Eden, O all-blessed and most sacred Chariton.
(taken from: http://goarch.org/chapel/saints_view?contentid=220)
Through the prayers of our Holy Fathers, Lord Jesus Christ our God, have mercy on us and save us! Amen!
Posted by Agioi_Anargyroi at 9:47 AM